For more than 30 years, Connecticut Yankee stored its spent nuclear fuel assemblies in the reactor's spent fuel pool located on the plant site. The spent nuclear fuel and Greater than Class C waste (GTCC waste is irradiated steel removed from the reactor vessel during plant decommissioning) will be stored at the site until the Department of Energy (DOE) meets its contractual and statutory obligations under the Nuclear Waste Policy Act of 1982 to remove this material from the site.

After an extensive analyses and comparison of fuel pool and dry cask storage options, CY chose the dry cask option for storing its 1019 spent fuel assemblies and GTCC waste.

The Independent Spent Fuel Storage Installation (ISFSI) site, selected from eight carefully researched areas, is located on CY's property about three-quarters of a mile from the former reactor site. The secluded location of the ISFSI is tucked in a slight valley between natural ridgelines and is out of sight of nearby rivers. The NAC-MPC fuel storage and transport canister system chosen by CY is licensed by the NRC for both storage and transportation. 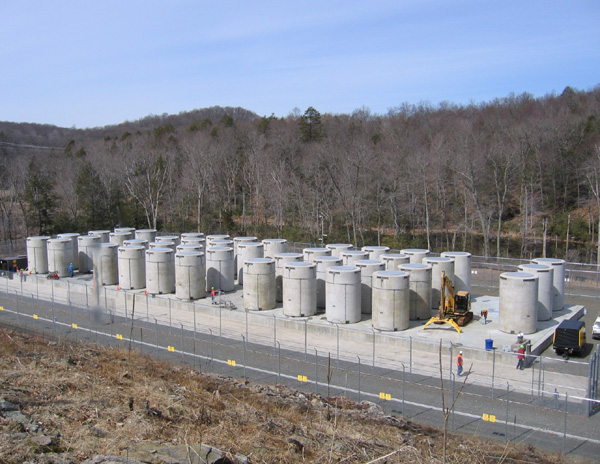 There are 43 dry storage casks on the 70 by 228-foot, two-foot-thick concrete pad. Forty of the casks contain spent nuclear fuel assemblies and three contain GTCC waste. Each concrete cask has a three and a half-inch steel liner surrounded by 21 inches of reinforced concrete. Each storage cask, when loaded with the storage/transportation canister, weighs 126 tons. The entire dry storage process -- procuring materials, fabricating the containers, constructing the storage facility, and transferring the fuel -- took approximately three years to complete.

The DOE was required by contract and statute to begin removing spent nuclear fuel and GTCC waste by January 31, 1998. To date, the DOE has not removed any spent fuel or GTCC waste from the CY site, and it is unknown when it will. In the meantime, it is CY's responsibility as a U.S. Nuclear Regulatory Commission (NRC) licensee to store the spent nuclear fuel and GTCC waste in accordance with NRC regulations likely for many years to come.

Since 1998 Maine Yankee Atomic Power Company, Connecticut Yankee Atomic Power Company, and Yankee Atomic Electric Company have been in litigation with the DOE seeking monetary damages as a result of the DOE's partial breach of its contractual obligations to take title and begin removing spent nuclear fuel and Greater than Class C waste (GTCC waste) from the three sites by the end of January 1998. Four rounds of litigation are now complete. To date the 3 Yankee Companies have recovered approximately $575.5 million in court awarded damages.

The longer the federal government delays in fulfilling its contractual obligation to remove the material, the longer these single-asset companies are required to remain in business and the damages will continue. The ongoing litigation between the three companies and the DOE is being conducted in phases as an earlier U.S. Federal Appeals Court decision ruled that utility companies, such as the three Yankee Companies, cannot receive damage awards for costs that have not yet been incurred. As a result, the three companies expect to continue to litigate with the DOE every several years to request damages for costs incurred resulting from the federal government's failure to remove the spent nuclear fuel and GTCC waste from the three Yankee sites as required by contract.

At the conclusion of the Phase I cases and all appeals, in early 2013 the three companies received payment of approximately $160 million in court awarded damages from the federal government for the years through 2001 for Connecticut Yankee and Yankee Atomic and through 2002 for Maine Yankee.

In November 2013, as a result of the Phase II litigation, U.S. Court of Federal Claims Judge James F. Merow awarded the three companies approximately $235.4 million in damages for the years 2002/3-2008 resulting from DOE's continuing failure to remove the spent nuclear fuel and GTCC waste from the sites. The federal government decided not to appeal Judge Merow's ruling and the Phase II awards were paid by the U.S. Treasury to the three companies in the spring of 2014.

In April 2016 as a result of the Phase III litigation filed in 2013, Judge Merow awarded the three companies approximately $76.8 million in damages for the years 2009/2012 resulting from the DOE's continuing failure to remove the spent nuclear fuel and GTCC waste from the sites. The federal government decided not to appeal Judge Merow's ruling and the Phase IIl awards were paid by the U.S. Treasury to the three companies in the fall of 2016.

In February 2019 as a result of the Phase IV litigation filed in 2017, U.S. Court of Federal Claims Judge Nancy Firestone issued her decision on a motion for partial summary judgment filed in July 2018 by Maine Yankee, Connecticut Yankee, and Yankee Atomic awarding the three companies approximately $103.2 million in undisputed damages for costs related to the federal government's continuing failure to honor its contractual obligations to remove spent nuclear fuel and GTCC waste from the three sites for the period January 1, 2013 through December 31, 2016. The undisputed damages awards were paid by the U.S. Treasury to the three companies in June 2019. Also in June, the 3 Yankee Companies and the DOE agreed to a negotiated Order of Judgment for $500,000 to resolve the disputed damages in the Phase IV cases. Receipt of these additional damages from the U.S, Treasury occurred in July 2019.

The Phase V DOE litigation cases were filed by the 3 Yankee Companies on March 25, 2021 seeking recovery of monetary damages resulting from the federal government's ongoing failure to fulfill its contractual obligations to remove the spent nuclear fuel and GTCC waste from the three Yankee sites for the years 2017-2020. The cases have been assigned to U.S. Court of Claims Judge Carolyn Lerner.

The Phase I-IV DOE litigation proceeds were dispositioned consistent with the provisions of a 2013 Federal Energy Regulatory Commission (FERC) Order. The FERC approved a filing following the award of the Phase I damages funds that accepted an agreement reached between the three companies and the state utility regulators in Connecticut, Maine and Massachusetts that have historically intervened in the companies' FERC rate cases. That agreement detailed an approach for applying the Phase I damages proceeds and future damages awards in a manner that best serves the interests of the 3 companies, and their utility owners and ratepayers in the respective New England states.

Please go to the Document Room to read the court decisions and company statements that include further background information regarding the ongoing litigation.

Safety is a top priority!

Radiation safety and industrial safety have always been the primary goals of all activities at the Connecticut Yankee site. During decommissioning, workers involved in the removal of plant equipment adhered to established radiological protection practices, engineering processes, and quality assurance procedures to ensure that radiation exposure was minimal and worker safety protected. Now that decommissioning is complete, CY's concentration on safety continues with a primary focus on safely and securely storing the spent nuclear fuel until the U.S. Department of Energy (DOE) fulfills its obligation to dispose of the materials. For more about the safe storage of spent fuel, see the Storage section above.